Claimed Lawyer ProfileSocial Media
David Lepant
Beatrice, NE Bankruptcy Lawyer
(402) 223-4071 119 N 5th Street
Beatrice, NE 68310
Bankruptcy, Business, Estate Planning and Probate
Compare Save
Show Preview
View Website View Lawyer Profile Email Lawyer
David Lepant graduated from the University of Nebraska at Kearney, Summa Cum Laude, with a degree in Business Administration. He was associated for eighteen years with Miller and Paine Department Stores in a variety of positions including store management and a member of the corporate executive management team. After Miller and Paine sold its stores to Dillards, Dave pursued his legal career, obtaining a Juris Doctor with Distinction degree from the University of Nebraska College of Law in 1993. In law school, Dave was Chairman of the Allen Moot Court Board and a member of the Order of the Barristers.Dave... 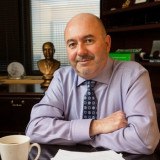